Posted on September 22, 2015 by Callaghan Innovation

Wellington web developer Rox Flame has merged his artistic and IT talents to take out the 2015 KiwiGameStarter prize.

The prize, sponsored by Callaghan Innovation, was awarded to Flames’ game Dynabrick on 11 September at the annual New Zealand Game Developers Association Conference in Auckland.

Dynabrick involves a “hyperactive space robot” who crashes while hurtling through space making a delivery. He lands on a planet and begins trying to regather his cargo, while encountering strange new life-forms. 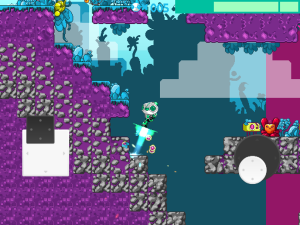 Flame runs web development firm Xequals with business partner Alex Matthews, but Dynabrick got its start at art school a decade ago, beginning a stop-start creative process which finally evolved into the winning concept this year.

“I left it for a while picked it up a bit at a time. Last year I pushed it for a few months, and basically re-did the whole thing.”

Surprisingly, it was not the technical skills of web development which Flame credits with helping win the competition, but the project management skills.

“Of all the web development crossover skills, project management skills has been the most valuable; breaking the work into tasks and setting goals, understanding my motivation loops.

“KiwiGameStarter was a motivation. It was about deadlines and accountability.

“As I go, I’m going to set a bunch of milestones which are public so I’m accountable. It’s really useful having a client saying ‘where’s it at?’.”

Dynabrick was praised by KiwiGameStarter organisers for its “morally reactive gameplay,” meaning the way payers treat the game environment affects their playing experience.

A long-time environmentalist, Flame says that aspect of the game evolved naturally, rather than being a planned aspect.

“It started as a puzzle game. As the worlds started coming out it felt like an environment you wouldn’t want to destroy.”

“This planet is a volatile and naïve ecosystem that has no Apex predators. But everything [the robot has] is geared to destroy stuff.”

This gives the player some powerful tools which they can – inadvertently or deliberately – destroy the environment they increasingly need to succeed in the game.

It also means a player can replay the game over and over which a different experience each time.

“We have incredible technical and creative talent here but initiatives like the KiwiGameStarter award are needed to seed new gaming business ideas.”

“The New Zealand game development industry reaped $79m in revenue last financial year, up from just under $20m in 2012, employing 568 FTEs, so earning a living from games is no longer a pipe dream.”

Flame’s goals for Dynabrick do not include global stardom, however.

“The realistic goal is exposure and sales, and then a follow-up game. The ideal goal – I can live on it and develop a games development arm to the business.”

Before any of that can happen, he is planning collaboration with 3D animators, musicians and others to  foster the sense of mystery and beauty the game needs in its production version.

The KiwiGameStarter prize includes $10,000, paid over two installments, licensing for a year, PR and legal advice, and mentoring, but Flame is realistic about the ramifications of running full-time business while putting enough energy into the game to get it across the line.

“I’m negotiating what happens (with running Xequals) for the main sprint next year. I’m launching a Kickstarter (crowdfunding) campaign next February to cover living costs. I’m selling early access to the game and merchandise. Funders can be part of the journey.”

Bringing curious gamers with him has been part of Flame’s strategy from the get-go.

“For this game to work, because I’m not a big publisher, growing the audience is really important.”

Building a social media profile for Dynabrick, and getting informal testing feedback through the local game development community, have all been geared towards exposure for the game  when it is released at a future public gaming convention.

Testing even occurred at the KiwiGameStarter after-party

“I’ll bust out an iPad and get immediate feedback, watching them play and seeing what needs to happen.”

Early access to Dynabrick is planned in March. A trailer video is out now.

Business. Technology. Success.
View all posts by Callaghan Innovation →
This entry was posted in Uncategorized. Bookmark the permalink.