Posted on December 4, 2015 by Callaghan Innovation

It’s time once again for the monthly highlights from the world of start-ups, brought to you by the Callaghan Innovation Programmes team.

An exciting announcement made during the Christchurch event saw the 17 start-ups from both Lightning Labs have access to an open cheque worth more than $500,000 each, to use on the Microsoft Azure platform over three years. The partnership between Lightning Lab and Microsoft New Zealand will see more than $20 million in cloud credits provided to Kiwi start-ups with the offer also available to start-ups in Lightning Lab XX’s female-founder accelerator and the next Lightning Lab – Auckland, both scheduled for 2016.

Eight teams have been selected to participate in the 2015/16 Sprout Accelerator. The teams attended their first block course at The BCC, Palmerston North on the 27 & 28 November. Key Note speakers were: Warren Bebb, CEO BioLumic; Bridget Maclean, Fonterra; Matthew Himelstein, Pandora; Jon Sandbrook, President of Pangenome Systems and Larry Ellison, Levno/Smartsoll. The next block course will be held in Ashburton on 11-12 December.

On the last day of November, eCentre – one of Callaghan Innovation’s supported founder incubators – facilitated their third demo day of the year. A total of fourteen start-up CEOs delivered punchy 90 second pitches, which was followed by networking. Hosted at Massey University, this event attracted entrepreneurs, investors, government, academic and students from the wider community.

New Zealand is the first country outside of Israel to have implemented the technology incubator model. Oren Gershtein – the man behind one of the most successful technology incubators in Israel – is an advisor to Callaghan Innovation providing guidance on New Zealand’s pilot programme. Earlier this month Oren visited New Zealand and met with incubator CEO’s, universities, entrepreneurs, investors and policy makers to discuss how Technology Incubators can contribute to building bigger, better tech companies faster. 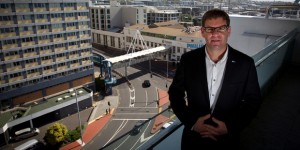 Last week, Avertana and Data Insight were announced winners for this year’s Entrepreneurs’ Challenge. Launched from a generous $3m foundation gift from New Zealand philanthropist and businessman Charles Bidwill, 18 companies have been awarded funding through University of Auckland’s Entrepreneurs Challenge.

The Samsung Springboard also came to an impressive close in early November, with CSx, I Measure U, and Auror being selected by the all-star judge line-up to win cash, Samsung tech and most importantly, massive industry connections to get the teams moving even faster in their target markets.

Start-up highlights will be back in the New Year.

Business. Technology. Success.
View all posts by Callaghan Innovation →
This entry was posted in Uncategorized. Bookmark the permalink.